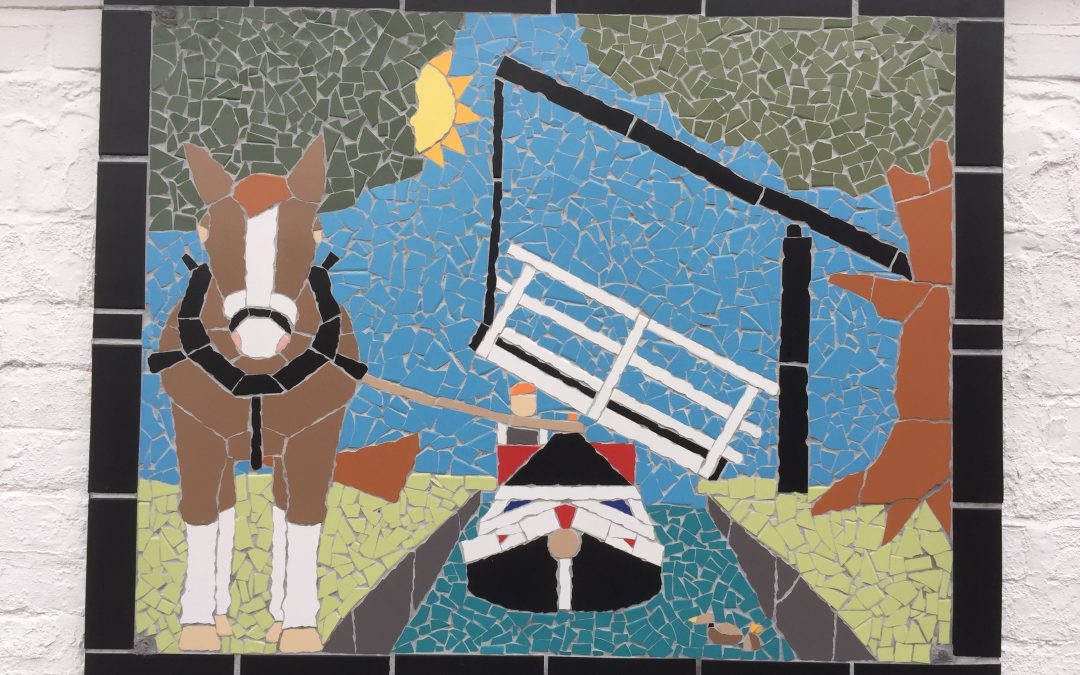 On a visit up to the boat back in October 2017, we decided to walk partly up the arm probably on a Sunday to earn beer tokens for later or to counteract the beer we’d already consumed. Paul usually takes his camera and I am often waiting for him to re-appear from behind a tree or somewhere else! I like mosaics so as soon as I saw one next to the first lock I was intrigued.

I always have my phone with me so that I can record any boat numbers I see to check off in my book (that’s a tale for another day) so I took a photo of the mosaic as I was interested and as I was sure I would see some more. True enough there was another one at the next lock and so on. We walked only 4 locks worth on this particular day. The mosaic had a letter and two pictures, one picture was something beginning with the letter and the other was something to do with canal life. Today we found T for Tadpole, H for Holly, E for Eel & N for Newt. As there were 17 locks on the arm, I had worked out what is was going to spell out. Can you?

Our next walk up the arm was in January 2018 and I wanted to find more mosaics, we then walked the same stretch as before and further on to find the next 8 locks and mosaics. I can’t remember but I’m sure there was a bit of grumbling from Paul as we had walked so far and therefore I’m sure beer was promised at the end of the walk! Today we found O for Oak, R for Rabbit , T for Thrush (maybe), H for Heron, A for Adder (possibly), M for Mouse, P for Perch & T for Toad.

Our next visit was in March 2018 and we drove to Sixfields and parked there. We then walked across to the canal to find more mosaics. We then realised we had missed some out somewhere in the middle as this was obviously the bottom of the flight. We only saw two mosaics and the bench and the plaque stating what its all about. We found R for Rose & M for Moth.

In April 2018 I wanted to find the ‘missing’ mosaics so we parked back at Sixfields and walked in the other direction. We found the missing three mosaics. O for Otter, N for Nettle, and A for Aloe Vera (I know that’s not right too!!)

I had already looked online to see if there was anything I could find out about the trail and what the actual objects were that I was unsure of, but I couldn’t find that. What I did find was an article by CRT when the mosaic was going to be officially opened.

To commemorate the 200th Anniversary of the opening of the Northampton Arm in 2015, a mural was created at Gayton junction, where it joins the Grand Union Canal and a mosaic bench at Lock 17 where the canal meets the River Nene. The idea of linking the two was the brainchild of Sandie Morton, IWA Northampton Branch Secretary: ‘’I wanted to encourage more people of all ages to walk and cycle the Arm. So I came up with the idea of a nature trail with mosaic plaques at each lock. Local children from Briar Hill and Delapre Primary Schools created the beautiful designs and manufactured them under the guidance of mosaic artist, David Bowers from Mosaic Madness.”

I then realised that there was a mosaic at the beginning so the next day I went over to the water point at Gayton Junction to see if there was anything there as there had been nothing on the top lock … found it!

Here are all 17 photos in order, spelling out The Northampton Arm